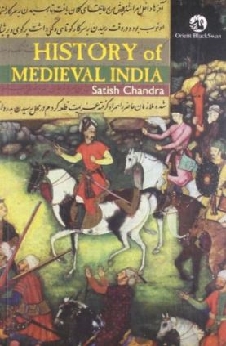 Satish Chandra’s History of Medieval India is a comprehensive overview of the history of the Indian subcontinent during the thousand-year period between the eighth and the eighteenth century. History of Medieval India studies this interesting period in Indian history when the land underwent drastic changes and was deeply influenced by the invading armies, religious movements, and the vicissitudes of the changing political, economic and cultural scene. To tell the history of a land spanning the geographical dimensions and the political divisions of the Indian subcontinent is in itself a formidable task. Satish Chandra executes this difficult mission withthe eye of an enquirer and the pen of a scholar.

A feudal medieval India is presented within the social context of the times that is bound to interest even lay readers, besides students of history and those appearing for competitive examinations. The series of invasions that shook up the Indian sub-continent, an ever changing kaleidoscope of cultures, political upheavals and internal revolutions that happened during these ten centuries have been described with utmost detail in History of Medieval India. The book is a result of intense research of archived documents, coins, monuments, books, travellers accounts and other sources that have survived the ravages of time.

Whether you are a teacher seeking authentic information to rely upon or a student appearing in a competitive examination or just keen on gaining knowledge about India’s past, this book is a perfect companion that brings an accurate account of history. From the Marathas, to the Cholas and Pandyas, contribution of every dynasty influencing the course of history of a particular region in a given time period has been listed out.

Chapters on the Rajputs, Mughals and Turkish invaders recorded bring out the turbulent times that many parts of North India underwent and what contribution these kingdoms and societies made towards the country that we have come to live in.

With rise of every new dynasty there were many shortcomings that brought about their fall and the historian in Satish Chandra with deep insight about the historical events dissects the many reasons for their downfall in detail.

Be the first to review “History Of Medieval India” Cancel reply