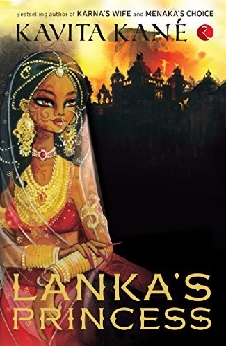 Surpanakha, Ravan’s famous sister. Ugly and untamed, brutal and brazen?this is often how she is commonly perceived. One whose nose was sliced off by an angry Lakshman and the one who started a war. But was she really just a perpetrator of war? Or was she a victim? Was she ‘Lanka’s princess’? Or was she the reason behind its destruction?

Surpanakha, which means the woman ‘as hard as nails’, was born as Meenakshi?the one with beautiful, fish-shaped eyes. She is often the most misunderstood character in the Ramayana. Growing up in the shadows of her brothers, who were destined to win wars, fame and prestige, she, instead, charted out a path filled with misery and revenge.

Accused of manipulating events between Ram and Ravan, which culminated into a bloody war and annihilation of her family, Kavita Kane’s Lanka’s Princess makes us see the familiar events unfold from the eyes of a woman more hated than hateful?

Be the first to review “Lanka’s Princess” Cancel reply