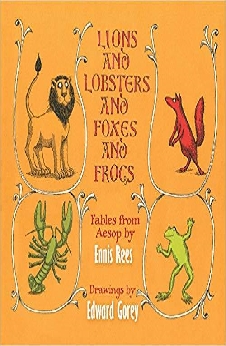 Lions And Lobsters And Foxes And Frogs: Fables From Aesop

A new approach to the ancient fables of Aesop features charming rhymes and winsome images by a beloved illustrator. Artist Edward Gorey sets the scenes for poet Ennis Rees’s modern interpretation of Aesop’s verses, which recount how animals with all-too-human failings receive their just desserts.
Memorable renderings of familiar and lesser-known vignettes include the fable of the industrious ant, who prepares for the hardships of the coming winter, and the feckless grasshopper, whose laziness proves fatal. A mighty lion is amused at the notion of a tiny mouse coming to his rescue, a na?ve young crustacean admires the bright red shell of a boiled lobster, and a swarm of flies are undone by their attraction to a pool of spilled honey. These and other timeless tales provide humorous insights into the folly of greed and vanity and the rewards of virtuous behavior.

Lions and Lobsters and Foxes and Frogs Reviews

Be the first to review “Lions And Lobsters And Foxes And Frogs: Fables From Aesop” Cancel reply