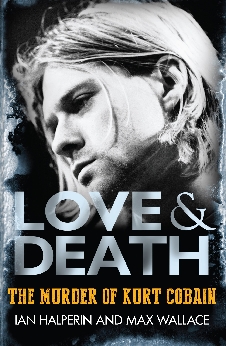 On Friday April 8th 1994 the body of Nirvana frontman Kurt Cobain was discovered in a room above his garage in Seattle. The police declared it an open-and-shut case of suicide, but this book, drawing on new forensic evidence and police reports, explodes the myth that Cobain took his own life and reveals the official scenario was scientifically impossible.”Love and Death” paints a critical portrait of Courtney Love – suspected of knowing the whereabouts of Cobain for the few days previous to his death, and that Cobain was planning to divorce her. The case tapes of Love’s own PI Tom Grant are revealed, introducing a number of characters that were connected to Cobain and his death. Award winning investigative journalists Max Wallace and Ian Halperin present a chilling and convincing case that Cobain was murdered, and call for the case to be reopened and properly investigated.