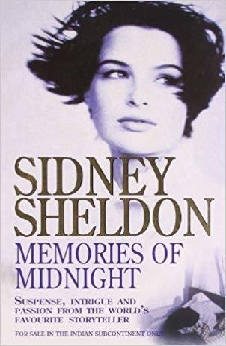 MEMORIES OF MIDNIGHT – The internationally best-selling ‘The Other Side of Midnight’ was dominated by the man who is Sheldon’s most magnificent creation?
‘Constantin Demiris’
Billionaire, art lover, womaniser?and killer. To Noelle, the woman who betrayed him, and Larry, the man who stole her, Demiris brought a chilling retribution. But Demiris’ terrible revenge is far from complete?
‘Ioannina, Greece’
In the seclusion of a remote convent a young woman emerges from the trauma of memory loss?
‘Catherine Alexander’
Larry’s widow, sees Demiris as a benefactor, the man who restores her faith in the future. How can she know the fate he has in store, or that her life is bound up with other victims of his mighty ego?From the exotic shores of the Mediterranean to post-war London, ‘Memories of Midnight’ is a passionate, unforgettable story of an innocent woman’s fight against a terrifying destiny
In this deadly game, there can only be one winner?If Judd is to survive he must play the game to win.
This is Sidney Sheldon’s first novel ? a gripping, intense thriller that brought him fame as a bestselling novelist.

Be the first to review “Memories Of Midnight” Cancel reply