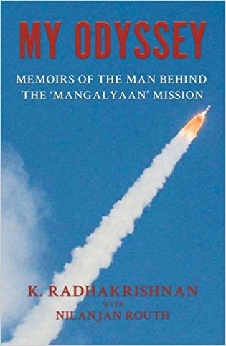 My Odyssey: Memoirs Of The Man Behind The Mangalyaan Mission

K. Radhakrishnan was named by Nature magazine as one of the top ten people who mattered in science in 2014?the first Indian scientist to be so honoured. Earlier that year, the Indian Space Research Organization (ISRO) had successfully accomplished the Mars Orbiter Mission?popularly called the ‘Mangalyaan’?under Radhakrishnan’s energetic and determined leadership.
Witness to the transformation of India’s space programme since the era of Dr Vikram Sarabhai, Radhakrishnan cut his teeth as an avionics engineer on the SLV-3 project, the country’s first satellite launch vehicle. He worked with stalwarts like Dr A.P.J. Abdul Kalam, Prof. Satish Dhawan and Prof. U.R. Rao, wearing several hats during his illustrious career. A foresighted institution builder, Radhakrishnan created efficient centres to use satellite data for the benefit of people, besides the establishment of a tsunami warning system. As India’s space chief, he triumphantly led ISRO through many historic milestones, including the successful launch of GSLV with an indigenous cryogenic engine for the first time.
Packed with invaluable information and insights, this fascinating memoir takes us behind the scenes of the cutting-edge world of India’s scientific achievement. A fast-paced, awe-inspiring read, My Odyssey is the story of how one man’s vision and commitment can bring glory to a nation.

Be the first to review “My Odyssey: Memoirs Of The Man Behind The Mangalyaan Mission” Cancel reply