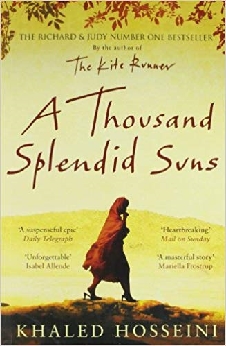 A Thousand Splendid Suns’ is a contemporary novel that tells a gripping story of two women with contradictory attitudes and how their decisions shape future generations. A marvelous work of fiction which brings an untold side of Afghanistan in limelight, this novel is irresistible. Khalid Hosseini has once again depicted a plethora of human emotions and beauty of Afghanistan through his distinctive story telling. These books became number one New York Times bestseller for fifteen weeks following its release and according to the author, it is a “mother-daughter story”. It won the Book Sense book of the year award for fiction and the Richard and Judy Best Read of the Year in 2008.

The title of the book is an inspiration from a line in the poem “Kabul” by the 17th-century Iranian poet Saib Tabrizi. This novel is set in Afghanistan from the early 1960s to the early 2000s. This period saw some of the ugliest phases in Afghanistan as it witnessed the Russian invasion, Taliban rule and American intervention. It revolves around two women, Mariam and Laila, who have contradictory attitudes and very little in common. However, a series of unfortunate events and dramatic changes intertwine their lives and their subsequent friendship and support for each other is the gest of this book.

Khalid Hosseini takes us through an unforgettable journey of war, misery, troubles, losses and ultimately the divine fate. Along with these two brave women, the hardcore Pashtun, Rasheed give a different angle to this saga. On a wider perspective, ‘A Thousand Splendid Suns’ is a contemporary reflection of Afghani women and their womanhood.

Be the first to review “A Thousand Splendid Suns” Cancel reply