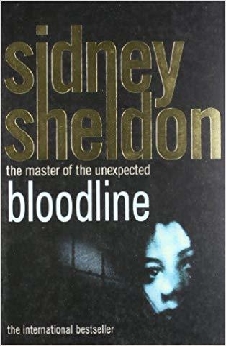 Bloodline is another thriller novel from bestselling author, Sidney Sheldon. The story revolves around Elizabeth Roffe, who, after the unexpected death of her father, becomes the sole heiress to his billion dollar empire. She also realizes that she is all alone in a world that is hostile towards her. She discovers her way around the nasty company politics and manages to hold her fort.

Elizabeth Roffe’s life is thrown off the rails when the news of her father’s death is broken to her. She is devastated by the news but she soon realizes that she is the successor to his billion dollar pharmaceutical company, Roffe and Sons. Suddenly pushed into the affairs of the company and its nasty internal strifes, she finds herself incapable of handling it. She seeks solace and comfort in the company of Rhys Williams, who was her father’s right hand man.

The board, comprising of the extended family and Rhys, is fighting tooth and nail to make the company public. Every person on the board has his or her own interests to look after. In the face of massive pressure, she opposes the plans to go public and that makes her a target for assassination attempts and sabotage.

Bloodline is the story of the evolution of Elizabeth from a shy and diffident girl to a lady who is confident enough to run a billion dollar enterprise. The book was first released in 1977. This reissue edition was published by Harper in 2005 and is available in paperback.

Be the first to review “Bloodline” Cancel reply