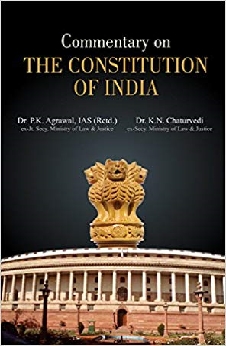 Commentary On The Constitution Of India

Dr. P.K. Agrawal is first-class first in law and a gold medalist from University of Allahabad in 1973. He started his career as a lecturer in law. He did LL.M. from Calcutta University when he was the District Magistrate in IAS cadre of West Bengal in 1987. He was awarded D.Phil. in Law from Allahabad University in 1992 for review of land laws of Uttar Pradesh. Dr. Agrawal worked as Joint Secretary, Department of Justice, Ministry of Law and Justice, Govt. of India from 1997 to 2002, where he tried to implement judicial reforms. He was also a member of three men drafting committee of the I.T. Act. Dr. Pramod Kumar Agrawal is a prolific writer of Hindi and English and has sixty books to his credit. He worked as an Advocate and partner after retirement with Khaitan and Company, a leading law firm. At present, Dr. Agrawal is the Managing Partner, Vas Global, a New Delhi based law firm.

Commentary on the Constitution of India Reviews