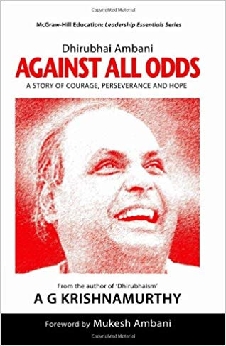 Dhirubhai Ambani: Against All Odds: A Story Of Courage, Perseverance And Hope

Dhirubhai and Reliance’s success have been so phenomenal that most people are unable to see beyond he glitter of their wealth. Dhirubhai’s success was by no means a walk in the park. He had to fight long and hard for it. And that is what is so inspiring about his life and success. It gives us the courage ‘to dream…with our eyes open’ as he put it.

This is a collection of stories not just about dreams but about the price that you pay for achieving them. Dhirubhai’s path was liberally sprinkled with obstacles. Some of them were deliberately placed by peers who hoped in vain to slow down his hard-to-beat pace, and some by fate itself. But unlike you and me who would probably change course after overcoming a few, he on the other hand, persevered, found a way around them, bulldozed his way through the others, but more importantly never, ever lost hope, and was rewarded a hundredfold because of it.

Against All Odds Reviews

Be the first to review “Dhirubhai Ambani: Against All Odds: A Story Of Courage, Perseverance And Hope” Cancel reply