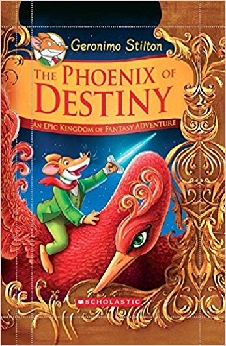 Geronimo Stilton And The Kingdom Of Fantasy: The Phoenix Of Destiny

This book is a part of the well-known children’s book series “Geronimo Stilton”. Geronimo Stilton is the protagonist of the book and he is a mouse. The entire story is told through his point of view. He lives on Mouse Island with his sister and nephew. In this particular book, Geronimo talks about returning to the kingdom of fantasy with the help of Phoenix of destiny. He meets some friends-Blossom and Queen of the fairies. Blossom is up to something. She sends him on a magical quest. Oblivious of what the quest really has in store, Stilton goes to a mystical land where his mission turns out to be a dangerous one. This story puts Stilton through different puzzles and mysteries and his friends who are trying to break out of this mystery land by putting the pieces together face similar situations. Will they be able to come out victorious or is it going to lead them to horrible consequences? Did Stilton made a mistake by agreeing to go on this quest? Why did Blossom send him here? Find out all the answers on this captivating journey with Geronimo Stilton. These books have been written in a way that they look like autobiographies of Stilton, but they have actually been written by Elisabeta Dami. This series well-known and is loved by children between the ages of 6-12. Those kids who love to read fantasy and magical stories, they will be quite interested in this book and series. A journalist mouse who writes for a newspaper named The Rodent Gazette is a funny yet intriguing read for many kids around the world.

Geronimo Stilton and the Kingdom of Fantasy Reviews

Be the first to review “Geronimo Stilton And The Kingdom Of Fantasy: The Phoenix Of Destiny” Cancel reply