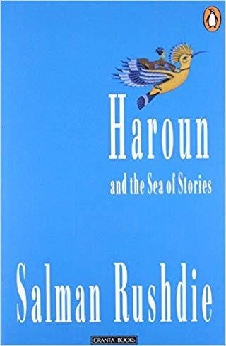 Haroun And The Sea Of Stories

Written by the world-famous writer, Salman Rushdie, Haroun And The Sea Of Stories is a fantasy book that can be enjoyed by children as well as adults. It is the fourth book by the popular author who dedicated this book to his son, from whom he had been separated for a while. The name of the main character in this book is Haroun, whose magical experiences are depicted through the pages.

Haroun lives with his father named Rashid, a locally famous storyteller whose wife, Soraya (also Haroun’s mother), is seduced by the neighbour. Rashid soon works for local politicians, and along with Haroun, is sent to the Valley of K to speak on behalf of a politician named Snooty Buttoo. On their journey in Buttoo’s yacht, Haroun stumbles upon the Iff, the Water Genie who plans to detach Rashid’s imagination.

Haroun, appalled at the idea, demands to speak to the Water Genie’s superior. Upon his request, he is taken to the magical Sea of Stories with the help of an artificial intelligence nicknamed Butt. There, Haroun discovers a hidden world where a battle is being waged between two rival kingdoms.

Haroun and the Sea of Stories Reviews