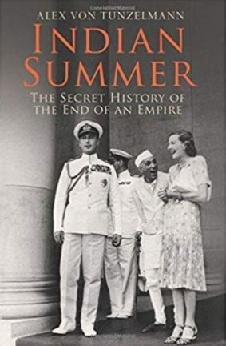 Indian Summer: The Secret History Of The End Of An Empire

On the balmy evening of Aug. 15, 1947, Earl Mountbatten of Burma, the great- grandson of Queen Victoria and the last viceroy of India, gave a sumptuous party in the Mughal Gardens of Delhi to mark the end of empire. Thousands of tiny lanterns hung from the bougainvillea and jacaranda trees as the great and good of India, past and future ? native princes in dazzling array, British colonial army officers, Indian politicians of every creed and stripe ? wandered among the fountains and rose beds, sipping Champagne and eating canapes.

Louis Mountbatten moved among the throng with his vivacious wife, Edwina, whose close relationship with Jawaharlal Nehru, India’s foremost statesman, was already the source of lurid local gossip. Nehru had been independent India’s first prime minister for less than 24 hours. Pakistan was not yet a day old.

It was a surreal occasion ? Britain renouncing and dividing up the jewel of empire with every appearance of satisfaction; India and Pakistan applauding a freedom that would soon be engulfed by bloodshed and war. The viceroy was gorgeous in his finery, bedecked with medals, sash and brocade like a figure from a Gilbert and Sullivan opera. Implausibly handsome, royal of blood and regal of bearing, Dickie loved to dress up. No Englishman was better suited to the task of representing the dissolution of empire as a grand celebratory gesture.

With the stroke of a pen, the king’s representative in India granted independence to four-fifths of the British Empire, or 400 million souls. The young British historian Alex von Tunzelmann has elected to tell the story of that handover and its aftermath through five people: the Mountbattens; Nehru; Mohammed Ali Jinnah, founder of Pakistan; and Mohandas Karamchand Gandhi, spiritual leader of the independence movement. This is history as multiple, interconnected biography, and what it lacks in depth is more than made up for in panache. Beyond the great clash of communities, religions and ideas, Indian independence was a story of the subtle interplay of these five powerful individuals, whose relations encompassed three close friendships, two bitter enmities, at least three cases of hero-worship, a love affair and one very odd marriage.

Be the first to review “Indian Summer: The Secret History Of The End Of An Empire” Cancel reply