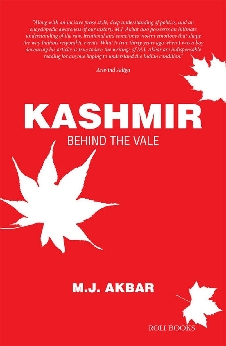 Kashmir: Behind The Vale

Kashmir lies at the edge of India’s borders and at the heart of India’s consciousness. It is not geography that is the issue; Kashmir also guards the frontiers of ideology. If there was a glow of hope in the deepening shadows of a bitter Partition, then it was Kashmir, whose people consciously rejected the false patriotism of fundamentalism and made common cause with secular India instead of theocratic Pakistan. Kashmir was, as Sheikh Abdullah said and Jawaharlal Nehru believed, a stabilising force for India.

Why has that harmony disintegrated? Why has the promise been stained by the blood of rebellion? M.J. Akbar, the celebrated author of India: The Siege Within, Nehru: The Making of India, Riot After Riot and The Shade of Swords: Jihad and the Conflict between Islam and Christianity delves deep into the past for the roots of Kashmiriyat, the identity and culture that has blossomed within the ring of mountains for thousands of years. He records Kashmir’s struggle in the century to first free itself from feudal oppression and then enter the world of modern India in 1947. Placing the mistakes and triumphs of those early, formative years in the perspective of history, the author goes on to explain how the 1980s have opened the way for Kashmir’s hitherto marginalized secessionists. Both victory and defeat have their lessons; to forget either is to destablize the future. Kashmir and the mother country are inextricably linked. India cannot afford to be defeated in her Kashmir.

Kashmir -Behind The Vale Reviews

Be the first to review “Kashmir: Behind The Vale” Cancel reply