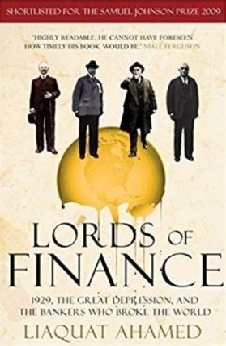 Lords of Finance: The Bankers Who Broke the World is a nonfiction book by Liaquat Ahamed about events leading up to and culminating in the Great Depression as told through the personal histories of the heads of the Central Banks of the world’s four major economies at the time: Benjamin Strong Jr. of the New York Federal Reserve, Montagu Norman of the Bank of England, emile Moreau of the Banque de France, and Hjalmar Schacht of the Reichsbank. The book discusses the personal histories of the four heads of the Central Banks of the United States, Great Britain, France, and Germany, and their efforts to steer the world economy from the period during the First World War until the Great Depression. The book also discusses at length the career of the British economist John Maynard Keynes who criticized many of the policies of the heads of the Central Banks during this time. The book was generally well received by critics and won the 2010 Pulitzer Prize for History. Because the book was published during the midst of the financial crisis of 2007?2010, the book subject matter was seen as very relevant to current financial events.

Be the first to review “Lords Of Finance” Cancel reply