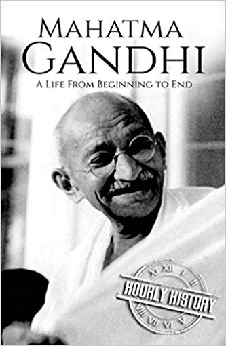 Mahatma Gandhi: A Life From Beginning To End

Mahatma Gandhi
Gandhi. The name conjures the image of a man, unimpressive in appearance, simple in his lifestyle, who spent his life pursuing independence for India. Months after the country achieved that independence from Great Britain, Gandhi?s life ended when an assassin killed him. But Gandhi?s legacy lives on. Gandhi?s rise to political and spiritual leadership is the incredible saga of a man who, in his youth, showed no signs of greatness but who became one of the most influential men of all time. The civil rights movement that was led by Martin Luther King, Jr. owes its inspiration to Gandhi; the patient suffering of Nelson Mandela in his fight against apartheid grew out of the civil disobedience of Gandhi.
Inside you will read about…
– Growing up in India- Studying Law in London- Political Activism in South Africa- Becoming the Mahatma- The Battle for Independence in India- The Martyr of IndiaAnd much more!The twentieth century saw the rise of despots and dictators, charlatans and cowards; it witnessed the evolution of weapons so deadly that whole countries could be destroyed; it incubated the rise of political philosophies and religious extremism that sought to eradicate democracy and mock compassion. But amidst all of the violence and hatred, Gandhi remained steadfast to his beliefs, and his beliefs have changed the world.

Be the first to review “Mahatma Gandhi: A Life From Beginning To End” Cancel reply