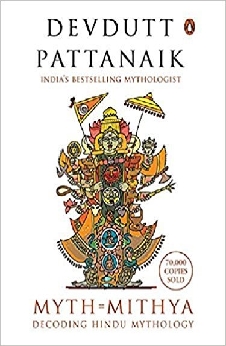 The book ‘Myth = Mithya : Decoding Hindu Mythology’ is fabulously conceptualized a story based on Shiva and Shankara. The book has also decoded the Phallic Symbol and also demonstrates the story about the man who was a woman and other queer story from Hindu lore.

The story has a lucid and provocative introduction named Ancient Hindu seers knew myth as mithya. Pattanaik has explained that it would be arrogant to presume that the ancients actually assumed in “virgin births, flying horses, talking serpents, gods with six heads and demons with eight arms”. These are symbolic presentations of the thoughts of truths that need to be conveyed. The concepts in the book are inspired by the revolutionary art, establishment of empires etc. The book is segmented into three parts decanted into the Brahma-Saraswati, Vishnu-Lakshmi and Shiva-Shakti. It features these gods or goddesses in simple and attractive prose and the reference has been taken from the Vedas and Puranas