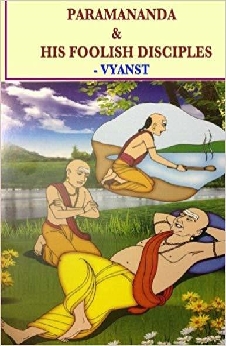 These were the days of Gurukula education system when parents sent their children to a Guru. The children stayed with the Guru as his disciples (or Sishyas) in his Ashram (or Math), served him and learnt from him. Guru gave his students food and shelter besides education.The Guru also loved the disciples as his own children. They were like a family. It was just like a home for the disciples. Even Kings had to send their sons to a Guru. Paramananda was one such Guru. Actually he was the King?s Guru and hence he was also called as the Rajguru. He had twelve disciples. All these disciples were innocent, gullible and extremely foolish. Their interactions were humorous and their acts were comic. One Guru – twelve foolish students was like a bundle of laughter and comedy. These funny tales are a part of South Indian (especially Telugu and Tamil) folklore and our stories are based on it. Read and enjoy..

Be the first to review “Paramananda & His Foolish Disciples” Cancel reply