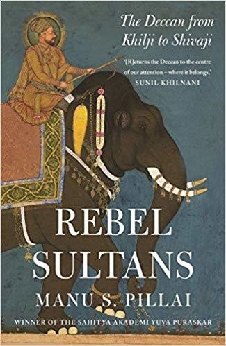 Rebel Sultans: The Deccan From Khilji To Shivaji

Deftly and with great vividness, Manu S. Pillai takes us through 400 years of roiling history and returns the Deccan to the centre of our attention ? where it belongs.’ SUNIL KHILNANI
‘Minutely researched and yet instantly accessible . . . Rebel Sultans will bring the fascinating history of the medieval Deccan to a whole new generation of readers.’ WILLIAM DALRYMPLE
‘In this lively study, Manu S. Pillai does a superb job of re-orienting the narrative of late medieval and early modern South Asia towards the Deccan.’ MUZAFFAR ALAM
‘In Rebel Sultans, the Deccan is presented in seven engaging chapters, each focused on a pivotal moment, character or symbol, that together trace the dynamic history of the region and convey its unique flavour.’ NAVINA NAJAT HAIDAR
In 1707 when Emperor Aurangzeb went to his grave, the Mughal empire began to crack into a hundred fractured pieces. It was the lure of the Deccan that drained this conqueror’s energies, putting him on a course of collision with his most threatening adversaries. After all, the Deccan was a land that inspired wonder. Its treasures were legendary, and its kings magnificent. It was a horizon of rousing adventure, attracting talent from beyond oceans. A traveller here could encounter bands of European snipers, available for military hire, or forbidding fortresses where African nobles scaled the heights of power. Diamonds and pearls lay heaped in the Deccan’s bazaars, while in its courts thrived Persians and Marathas, Portuguese and Georgians, presiding over a world of drama and betrayal. A thousand fortunes were made in the Deccan, drawing the formidable envy of generations of Mughal emperors.
In Rebel Sultans, Manu S. Pillai narrates the story of the Deccan from the close of the thirteenth century to the dawn of the eighteenth. Packed with riveting tales and compelling characters, this book takes us from the age of Alauddin Khilji to the ascent of Shivaji. We witness the dramatic rise and fall of the Vijayanagar empire, even as we negotiate intrigues at the courts of the Bahmani kings and the Rebel Sultans who overthrew them. From Chand Bibi, a valorous queen stabbed to death, and Ibrahim II of Bijapur, a Muslim prince who venerated Hindu gods, to Malik Ambar, the Ethiopian warlord, and Krishnadeva Raya on Vijayanagar’s Diamond Throne ? they all appear in these pages as we journey through one of the most arresting sweeps of Indian history. Unravelling a forgotten chapter in our medieval past, Rebel Sultans reminds us of a different age and a different time in the Deccan ? one that ended an empire and rewrote India’s destiny.

Be the first to review “Rebel Sultans: The Deccan From Khilji To Shivaji” Cancel reply