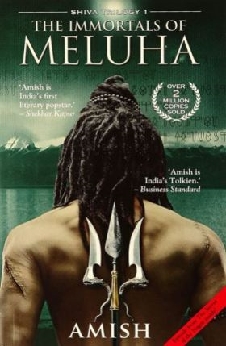 The Immortals Of Meluha

The Immortals of Meluha is the first novel of the Shiva trilogy series by Amish Tripathi.
Meluha is a near perfect empire, created many centuries earlier by Lord Ram, one of the greatest kings that ever lived. However, the once proud empire and its Suryavanshi rulers face severe crisis as its primary river, the revered Saraswati, is slowly drying to extinction. They also face devastating terrorist attacks from the east, the land of the Chandravanshis who have joined forces with the Nagas, a cursed race with physical deformities. The present king of Meluha, Daksha, sends his emissaries to North India in Tibet, to invite the tribes that live there to Meluha. One of those invited are the Gunas, whose chief Shiva is a brave warrior and protector. Shiva accepts the proposal and moves to Meluha with his tribe. They reach the city of Srinagar and are received there by Ayurvati, the Chief of Medicine of the Meluhans. Shiva and his tribe are impressed with the Meluhan way of life. On their first night of stay at Srinagar, the Gunas wake up amid high fever and sweating. The Meluhans, under Ayurvati’s orders, carry on the healing process. However, Ayurvati finds out that Shiva is the only one devoid of these symptoms and that his throat has turned blue. The Meluhans announce Shiva as the Neelkanth, their fabled saviour. Shiva decides to help the Meluhans in their war against the Chandravanshis, who had joined forces with a cursed Nagas; however, during his journey and the fight that ensues, Shiva learns how his choices actually reflect who he aspires to be and how they lead to dire consequences.

The Immortals of Meluha Reviews

Be the first to review “The Immortals Of Meluha” Cancel reply