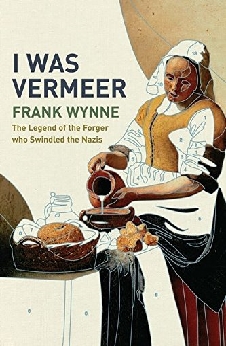 In a century that has alternately venerated and ridiculed the notion of the original, what better revenge for the mediocre artist than to turn to forgery? The century that spawned Duchamp’s urinal-turned-fountain, an art world in which American artist Mark Kostabi can pay students $8 an hour and sell the resulting ‘paintings’ for $30,000, can hardly carp at the chutzpah of a second-rate artist wedded to seventeenth-century ideals who palmed off his work on the most discerning connoisseurs of his time as priceless Vermeers. “I Was Vermeer” is the story of a paranoid, drug-addicted, alcoholic, hypochondriac painter whose journey from zero to hero earned him $50 million dollars, the acclamation of the world’s press and the satisfaction of swindling the Nazis. His canvases would almost certainly be prized among the catalogue of Vermeers if he had not confessed. Half a century after his death, his handiwork is still suspected in at least four Vermeers in major galleries, and the ugly daub sold last year at Sotheby’s for $30 million (and denounced by Brian Sewell as a fake) had long been attributed to him. “I Was Vermeer” takes a wry, sometimes scathing, amoral and irreverent look at forgery, the expert, and the career of a second-rate painter who became the world’s greatest forger.

I Was Vermeer Reviews

Be the first to review “I Was Vermeer” Cancel reply