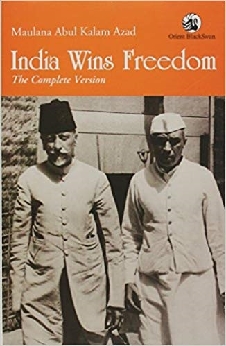 India Wins Freedom is an enlightened account of the partition from the author, Maulana Azad’s perspective. It includes his personal experiences when India became independent, and his ideas on freedom and liberty.
The book takes the form of an autobiographical narrative and goes over the happenings of the Indian Independence movement. The book traces the events that took place and ultimately led to the partition in a frank and profound manner. The book says that politics was responsible for the partition more than religion. It also states that India failed to maximise its potential when it gained independence. The book discusses political hypocrisy, and also touches upon contemporaries of the author’s, like Nehru, Gandhi, and Subhash Chandra Bose, and highlights their mind-sets during that time.
India Wins Freedom was published in 1988 by Orient BlackSwan in paperback.
Key Features:
When the book was first published, it was sealed for its controversial take on India’s independence movement.
On being released to the public, over 30 million copies of the book were sold all over the world.

Be the first to review “India Wins Freedom” Cancel reply